My fishless cycle in graph form

Joined Jan 5, 2015
·
35 Posts
Hi all.
I am currently going through the boring wait of a fishless cycle on my newly converted from salty 48" tank with a large sump.
I am recording all the water test results on a spreadsheet, and decided to plot the information on to a graph, which I will share on here, so everyone can watch the cycle.

I then filled the tank and sump, and added all the rock, which is recycled old reef rock from when it was a marine reef tank. Also the coral sand was re used too.
All of the rock has been jetwashed, dried, soaked in bleach, rinsed in running water for a week, and dried again. Sand also thouroughly washed.

After filling, I retested the water. (Just water, nothing added yet.)
Ph- 8.2
Ammonia = 0.2
Nitrite = 025
Nitrate = 0
These readings were probably due to some organics present in the rock/sand?

Anyway, I then added 10ml of Ammonia, and a bottle of Dr Tim's One and only bacteria. (Hoping it would speed up the cycle a bit)
This is day 3 on the graph !!
The graph then shows the progress of the cycle. Unfortunately, the ammonia calculator told me to add 10ml of ammonia, to raise the level in the tank to 2 or 3 ppm.
Unfortunately this took the level to 5ppm, so I did a 50% water change to drop the level to 2.5ppm
This is day 6 on the graph.
I only tested ammonia until it dropped, and when it dropped I started testing nitrite.
As you will see on the graph, ammonia and nitrite droppped to 0 on day 13, although ammonia had dropped to 0 on day 12.
So, today is day 14, and I have dosed ammonia again, to raise the level to 2.5ppm
As I test daily, I will update the graph, and I will update this post accordingly.
As you can see, my nitrates are rising nicely, and when I test tomorrow I will decide on a W?C to drop the Nitrate down.
Sorry about the long ( and probably boring ) post, but I thought it might be of interest to some, and also it shows how a bacteria culture can speed up the cycle. Last time I did a fishless cycle it took around 5 weeks to get to the stage I am in now.
Not that I intend to add fish just yet though !!
Anyway, here is the graph. If you can be bothered, Watch for updates !! 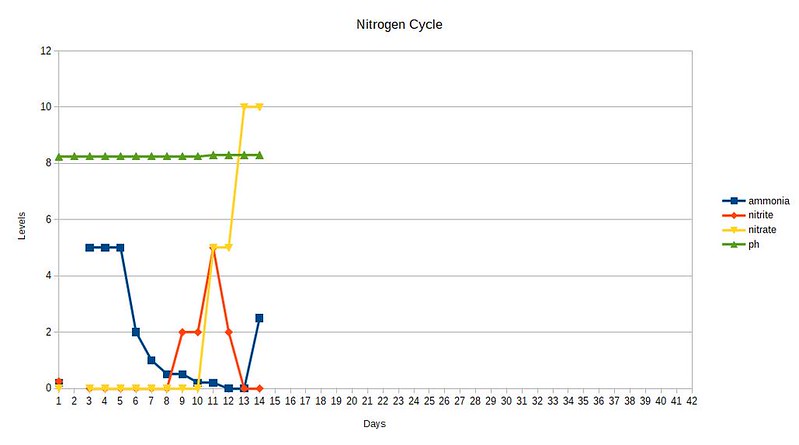 Joined Jan 27, 2017
·
404 Posts
Cool man. I also kept a detailed record when I cycled my first tank. I just have all my recording in a notepad on my computer with dates but maybe I'll do the same thing, we can compare results. opcorn:

Also, don't count on the Dr Tims making any difference. Perhaps those products cut down the cycle time by a week or two but I'm not even convinced of that (though some people will tell you otherwise). I used Seachem Stability and it took my tank 29 days to cycle.
S

Joined Jan 5, 2015
·
35 Posts
A notebook (paper ) is the usual way I go, but this time I thought I'd do it a bit different !
Could be interesting I guess, and a comparison source for others.

As for the Dr Tim's. I am in the camp that says it does work, in so far as reducing the cycle time, but I would never tip it in an new tank, and chuck fish straight in though.
The last 3 salty tanks I have cycled, all fishless and using ammonia, took a different time.
1st, without any bacteria, and no seeding etc took almost 6 weeks.
2nd, using some filter media from another of my tanks, took 5 weeks
3rd, with Colony, took less than 3 weeks, but I also used a lot of mature live rock from another of my reef tanks.

So I thought I would give Dr Tim a chance ! I didn't just tip it in the main tank though, I poured it into the input of my Main filter in the sump.
I do have a lot of filtration going on in this tank though. Including a TMV v2 bio 1000 sand filter !

I would have expected these two to result in an instant cycle...because of the media and live rock...not the bottled product.

Many found Dr. Tim's to work with instant fish years ago when the product was sold refrigerated.
S

Joined Jan 5, 2015
·
35 Posts
You're sort of correct.
Although both could handle ammonia very quickly, it took that long to get to the stage where it was also keeping the nitrates from climbing.
Probably not a fair comparison, but I was aiming for 0 nitrates, as they were marine systems. Denitrification seemed to spend ages to kick in.

I have also heard that about the Dr Tim's was better in a previous "version", but my LFS had a couple of bottles in the fridge, so I thought I'd try it.
I think to get to my current levels so soon is indicative of using a "jump start" bacteria product. There was no other seeding added.
Either way, I'm looking forward to fish shopping soonish !!
C

Joined Jun 11, 2017
·
1,676 Posts
There are products that do shorten the time it takes to cycle and Dr. Tim's generally does work well although it is true the old stuff was better. Some people will try one product and write them all off as being ineffective and this is not constructive.
S

Joined Jan 5, 2015
·
35 Posts
Agreed. I think the key point is speed up the cycle, rather than provide instant safety.
So far, so good.
G

Joined Jan 27, 2017
·
404 Posts
Here is mine for my 50 gallon tank. The one thing that you need to know that you can't see on this graph is water changes and addition of ammonia. The first water change and ammonia add was on day 15. Then on day 18 I basically started doing 10 gallon water changes every day or two and re-dosing ammonia to 2 ppm. The readings shown in the graph are BEFORE the water change and addition of ammonia for that day. So essentially after day 18 the ammonia reading for each day is from a starting point of 2 ppm from the day before. There were also a few days later on where I did 20 gallon water changes. You can kind of see them from drops in Nitrate. Also, most of the days where the nitrite level was the same (like days 19-22) it was actually maxed out off the scale so I don't know what it really was.

Joined Jan 5, 2015
·
35 Posts
To be honest, whenever I have tested for Nitrates, if Nitrites are present, it skews the nitrate results anyway.
S 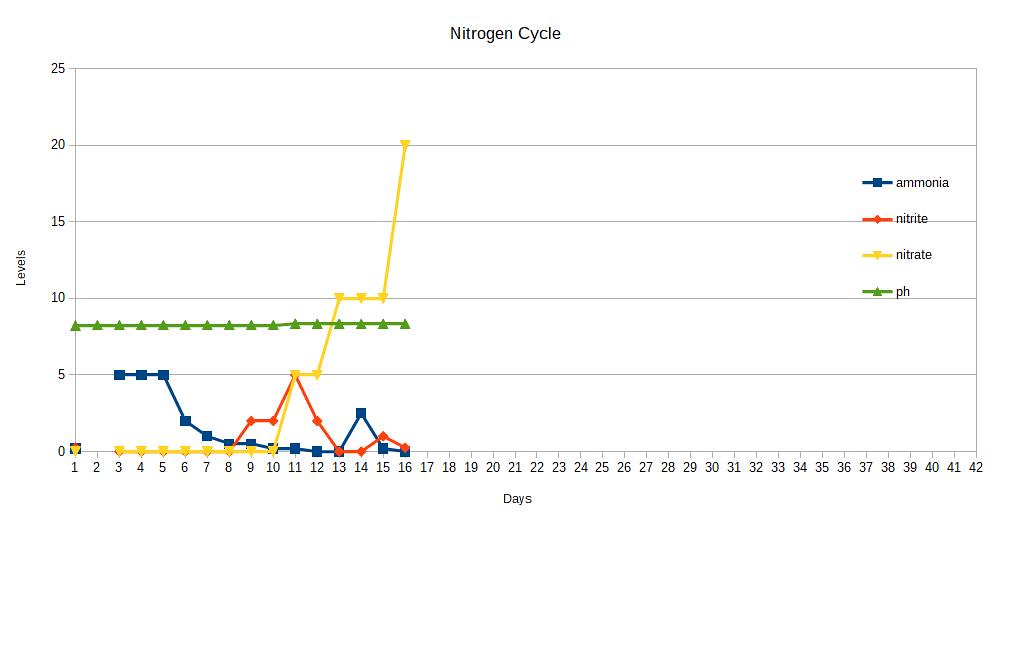 As you can see, after adding ammonia yesterday to achieve 2.5ppm, I have tested today and it is down to 0.
Also, the Nitrite is down to 0 .
So I tested the Nitrate, and it is at least 20.
By the way, I never test for Nitrate when Nitrite is present, as I've always found the results are skewed by the presence of Nitrite. Apparently something to do with the way the tests work.

Anyway, All looking good so far.
I have now put my fluidised Sand Bed filter online, so that will give me waayyyyy more capacity than I need, but Better too much than not enough.
I will post some pics of my sump tomorrow, to show the setup in case anyone is interested.
I'm now going to do a 50% water change.
I'm then going to add some more ammonia, and raise the level to 2.5ppm, just to confirm the filtration can cope, and I fully expect the ammonia and the Nitrite will have dropped to 0 within 24 hrs.

gillmanjr said:
Your cycle is done already.
Click to expand...

It certainly looks like it !
I've added some more ammonia today just to make sure, but I reckon I'm good to go .

Typical though, now I can add fish, I can't find anyone who has the ones I want !!
F

Did you create the graph with data in a spreadsheet?? If so, you couldn't email me the file that you used, could you?? I really want to do this for my fishless cycle

My address is fatladwithbeard at gmail dot com

Joined Jan 5, 2015
·
35 Posts
Yes, that's exactly what I did. I can send you the data file if you want. Which spreadsheet do you use? I did this on Libre office, but I can convert to excel if you want.
F

This is an older thread, you may not receive a response, and could be reviving an old thread. Please consider creating a new thread.